Our COVID-19 Response: Our commitment to our customers

Every Motion Graphics Animator Must Know These 5 Aspects of Animation

Every Motion Graphics Animator Must Know These 5 Aspects of Animation 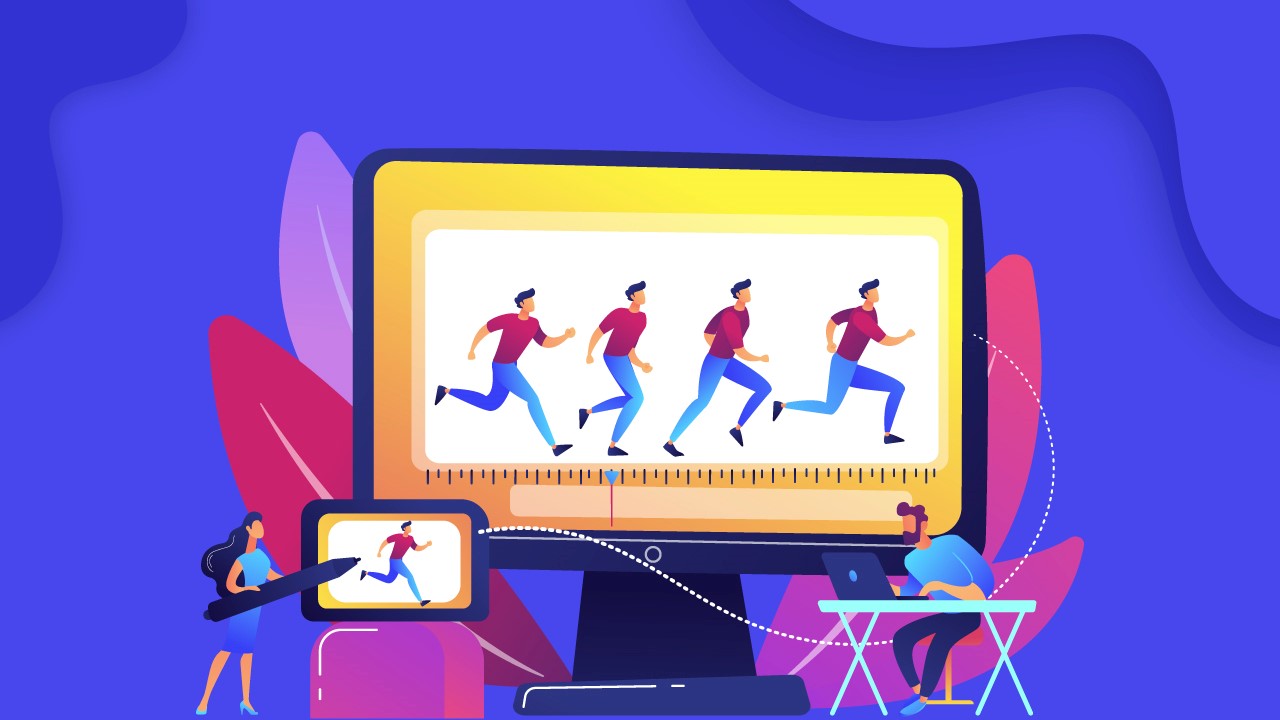 Storytelling using motion graphics and videos has become very common these days. Think about it carefully though, a long time ago, this was unimaginable. First of all, it was the drawings; eventually, the photographs arrived, but complete films in which a fictitious character shares experience? Wow, that was practically out of this world. Traditional animation was the beginning of everything.

With the arrival of computers, the internet, and various software for motion graphics appeared. Today, it seems that we have fewer limits to bring our imagination to reality, thanks to this process of giving movement to objects and drawings. Therefore, we explain to you the five most incredible aspects of animation that you should know.

1. What is an animation or motion graphics?

Animation is a method through which figures, vectors, images, or photographs merge in a framework to create the illusion of being in motion during a period or sequence. The animation process can be done by hand, cell phones, or even computers with computer-generated images (CGI). Did you know that the human eye can only retain an image for 1/16 second? That is right, when we observe a rapid succession of images, our brain unites them to form a single moving image.

These animations’ smoothness will largely depend on the number of images or frames that appear continuously on screens for one second. A traditional movie usually works with 24 frames per second, but technology is popularizing 60-frame animation.

2. What types of animations are there?

Since the advent of traditional animation, several changes took place in the past based on transparent cells. Today, computers allow animators to create settings, characters, and sequences more efficiently by offering more advanced and faster options for the creation process. However, animation or motion graphics require some serious attention and dedication to create something fascinating, conveying messages to the viewer and attracting. As a leading and professional motion graphics company, Animation Feast knows what it takes to evaluate the competitors and come up with an idea of motion graphics creation that fulfills all the needs and purposes.

This type of 2D animation comes under traditional animation since it was the first to become famous. It is about drawing freely, and the most important thing is that it is completely done by hand. Its primary purpose is to create backgrounds, storyboards, and characters in 2D environments.

How does traditional animation work?

To do this type of animation, you had to make drawings by hand, then put them on transparent acetate sheets called paint cells. That is why the term cell animation took birth.

Later, the advent of computers had utterly changed the traditional means and brought software that helped create video animations and motion graphics. Although during the ’90s animation studios began to scan the drawings on a computer to perform digital colorization, and now this process by hand is not done on paper but through tablets or touch monitors.

You probably think that with the advent of 3D animation, 2D animation disappeared from the scene. But no, classics never go out of style, and we can still find it out there. Where? In the entertainment and media industry.

To understand this type of animation’s first appearance, we go back to 1650 with the arrival of magic lanterns. It was a lantern that worked as a kind of archaic projector based on lenses that had images recorded and illuminated by a candle. Entertainment was the primary purpose of using it. Other inventions, such as the Phenakistoscope, the Praxinoscope, and the optical theater, followed during the 17th century.

To talk about the first film made with animations in its entirety, we must go back to France in 1908. This short film was called Fantasmagorie and was created by the artist Émile Cohl. This film contained figures made only with lines, and they join various sequences connected to each other.

They improved the process of animation through cells and with which it was possible to create films like Snow White and the Seven Dwarfs from Disney in 1937. Since then, animation was used mostly for the creation of cartoons for children.

With the advent of digital processes, digital animations can now be made using what is known as 2D digital puppets. This 2D animation can continue working with drawings created by hand but no longer on a sheet or cells but with digital tablets with which they create vectors instead of lines with pencils.

How to make 2D animations?

2D animation today, as we tell you, works with drawings created from vectors. Two processes quickly achieve the goal of making this animation. The first works built 2D characters with a “bones” system and manipulated them similar to 3D rig animations. That way, they can animate individual parts of the character’s body instead of doing the whole picture.

The other process works with characters digitally created by hand and giving them movement frame by frame. Yes, a digitized version of traditional animation. With the help of programs like Toon Boom Harmony and Adobe Animate CC, you work using a mixture of both processes to make animations faster and more automated.

To talk about the origins of this type of animation, we must go back to the ’90s. With more use of computers in the world, many artists began to use Flash to create short animations and publish them on the internet. Since the bandwidth at that time was not favorable, these had to be very small in size, and the program created by Macromedia was the perfect tool. Click here to learn about the fundamental principles of animation.

When Adobe bought the program, the popularity of Flash increased during 2005. However, 15 years later, languages ​​such as html5 and other programs have appeared that have entirely displaced the program. So much so that Adobe has already announced its end for December 31, 2020.

The programs that are most used for the creation of 2D animations by computer are:

While 2D animation was a fascination, with the advent of 3D animation, the world became more excited. It would have been unthinkable that objects could appear in three dimensions and that they rotate and move. Short films, feature films, television commercials, and more used 3D animations that time.

3D animation is without a doubt the most popular animation today. During the last 30 years, it has upgraded with Pixar films, such as Toy Story, Monsters Inc., and Coco. Like 2D vector animation, this animation also works with computer-generated imagery (CGI), but with an additional dimension in mind: depth.

How to make 3D animations?

3D animation is the manipulation of three-dimensional objects (on their x, y, z axes). For this to be possible, it is first necessary to model a character digitally, sculpt it perfectly and equip it with a skeleton that you can move and manipulate. These animated skeletons are known as character rigs, and the process is called rigging. To make the digital puppet go from pose to pose, the animator places a series of movement patterns between each key-frame or key-frame. Thus the computer automatically generates the necessary frames within each second to provide that sensation of movement.

Although it may seem that the computer is the one that generates the animation, the quality of this and the smoothness that transmits nature to the movement is the work done by the animator. To achieve this 3D animation, you need special programs to generate your characters and locations, giving them movement, adding light, visual effects, and physical effects.

Remember that your digital puppets’ movements can also be generated from motion capture or motion capture with real people. For many films and/or video games, actors are used to performing facial expressions and movements equipped with costumes that allow recording the movements used to animate the characters created by a computer.

It has not been long since 3D animation started. The first film created was entirely 3D animated and was released in 1995 and was Toy Story. Although the film directed by John Lassetter is not the first sample of this type of animation, it is the one that most revolutionized the creation process. The technique had already been used for television commercials, movies, and video games.

This animation was widespread, and the designing part of computer-generated films, but studios began to make combinations with shots from the real world. It led to technologies to create photorealistic animations and use high-level motion capture systems to generate more gaudy animations. Movies like The Lord of the Rings, Avatar, and Planet of the Apes used vivid animation. Is it the death of traditional cinema? Well, not really, since in movies like the last installment of Toy Story 4, simulated real cinema lenses help create animation films. Over the years, animation studios like Pixar and Dreamwork have specialized in creating characters with such careful details that they seem real.

Are you looking for free 3D animation programs? We recommend you visit our list here: the most used paid 3D software:

This 3D animation technique is similar to stop motion, which is why some animators consider it a variant. The difference is that pixelation does not simulate the movement of static objects or dolls, but of ordinary people and objects.

In other words, the actors in a pixelated movie act like human puppets. The truth is that, as in stop motion, pixelation can also be done by capturing images with a photo or video camera. In pixelation, “actors are used as frame-by-frame subjects in an animated movie by holding a pose while one or more frames are taken and subtly changing the pose before the next frame or frames.”

The term “pixelation” is derived from the experimental film Pixiliation, the work of animator Grant Munro. Although the Spanish filmmaker Segundo de Chomón was the one who used this technique for the first time in his film The Electric Hotel in 1908.

Hence, handling textures, lights, shadows, and highlights demand a lot of skill on the part of the animator or animator who wants to specialize in this 3D animation technique.

It is a 3D animation technique widely used in the film and video game industry. Motion capture consists of recording the movements, actions, and gestures of a living human or animal through a motion capture system. Usually, the actor or “entertainer” wears a special costume with strategic markings that capture his every move. In this way, each movement can be used or transferred for the animation of a digital character. Have you seen the movies Avatar, Planet of the Apes, or The Lord of the Rings? Well, in all these films, the 3D Motion capture animation technique was used.

In basic terms, cartoon-style 3D animation makes reality funnier. It is a completely manual 3D animation technique, that is, it is performed by professional animators and is based on the basic principles of 3D animation, which are the following:

Its main characteristic is the exaggeration or distortion of the appearance, a quality that comes from the cartoon. For this reason, it is common to see animated characters with exaggeratedly deformed features and excessive performances.

It is also a very popular 3D animation technique in the making of short films and feature films. However, it is also in advertising.

In the cinema there are many examples of 3D cartoon animation that were made by the most important animation studios: Spider-Man: Into the Spider-Verse (winner of the Oscar for Best Animated Film in 2019), Toy Story, Sherk, Angry Birds, The Smurfs, etc.

This 3D animation technique is a variant of the cartoon technique. How is it different? In that the snappy style is not only more simplified and humorous, it also has more marked timings and spacing. It also emphasizes stretching and squashing.

The animated short The food thief illustrates the ess

GET A FREE QUOTE Fill out this brief form and we will get in touch with you to discuss your project.